The Ties That Bind: A Guide to Bondage Play 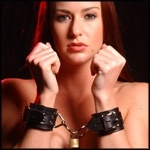 Bedroom Bondage is usually sexual in nature and is where most people begin to experiment with restraints. Bedroom bondage is usually a form of foreplay with sex being the goal. This type of bondage is practiced by many at different times in their sexual relationships. The types of equipment used tends to be less threatening and made of less expensive material than that used by people involved in the bdsm lifestyle. A beginner’s bondage kit usually contains cuffs made of faux fur or leatherette material with Velcro closures and a blindfold made of a soft fabric. These items create the illusion and sensation of being made helpless while giving the bottom actual control of their freedom.

More advanced bondage activities incorporate more realistic equipment in which the top has control of restraining and releasing the bottom. Locking restraints, ball gags, spreader bars, hoods and other sensory deprivation items would be used in more extreme bondage secenarios.  This tends to be where the line becomes blurred between bondage as a merely sexual activity and bondage as a more complex psychological experience which may or may not culminate in sexual release.

More extreme bondage requires thoughtful communication on the part of the parties involved. If you cannot talk about bondage activity with a person, you should definitely not practice it with them. Bondage requires trust and respect between the parties. The desired needs and limits of the top and the bottom will need to be discussed and respected to insure the safety of both parties. Pre determined safewords or signals should be agreed upon by the people involved before they engage in the practice of bondage. Other safety precautions that should be taken are the use of padlocks that all open with the same key, sharp scissors for cutting through bondage materials should an emergency occur and quick release be necessary. All parties involved should be sober. Make sure that the bound person moves at least once an hour to keep circulation going. Never leave a bound person alone, which is why even self-bondage should be carefully practiced. Most actually have a person near them the first few times they attempt self-bondage to help them out in case of emergency. 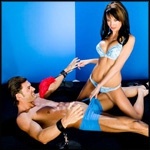 There are many reasons cited by people who enjoy restraint. For some it is the freeing sensation they get from being released from all responsibility, they are empowered by having their power taken away (power exchange).  For some it is part of other bdsm play, there are those who love the feel and fragrance of leather, and those who enjoy experiencing something dangerous in a safe way. Those who enjoy the power of restricting the movement of have varied motivations from giving pleasure to their partner, to the technical intricacies and inventiveness of more complex bondage scenarios. No matter what your reason is for being attracted to the practice of bondage, know that you are not alone and that there are many products available to you to keep your interest growing and fun!

This guide was written by Justine Case, Sex Toy Connoisseur