A Guide To Straight Jackets 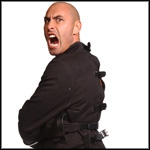 James Peters escaped a Posey Straitjacket 193 times within an eight hour period at a YMCA in England in September of 2003 (that's not him in the picture, by the way.). James might have been in huge trouble with Nurse Ratchett if he had been a costar to Jack Nicholson in the movie”One Flew Over the Cuckoo’s Nest.” The movie takes place in a mental hospital and features its star in a straitjacket. Straitjackets were originally created in the mid to late 1800’s as a way to calm mental patients locked in understaffed and overpopulated asylums. They have since become a popular restraint device in the bdsm community and have been featured in many movies as props or even as subject matter such as in the films Strait-Jacket and The Jacket.

Straitjackets are rarely utilized in institutions any more, but there are many straitjacket enthusiasts who enjoy using this extreme form of restraint in bondage scenes. Not only is a straitjacket a great way to render your partner helpless, the history behind the straitjacket creates a dramatic edge to the scene. Some straitjacket fetishists prefer having their jacket made out of particular materials like leather or rubber. Others like the realistic medical straitjackets constructed from canvas.

Most people who enjoy being bound by a straitjacket enjoy the sensation of being totally helpless and unable to escape. Others enjoy struggling against the bonds that are virtually inescapable by most people. Many straitjacket aficionados describe a powerful feeling of contentment that comes over them when they are bound by this type of restraint device.

When using a straitjacket as part of your bondage scene, be certain to stay near your detainee. People who are bound in a straitjacket should never be left alone and should be checked for circulation and repositioning every hour. Many people have noted the intense shoulder pain that can occur when the ligaments and muscles in the arms grow stiff and immobile. Many dominants enjoy the care giving aspect of monitoring their partner during scenes in which the bottom is rendered completely helpless. 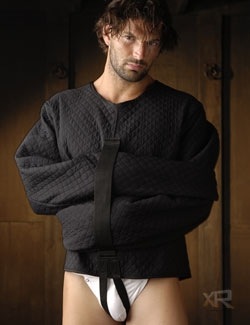 Straitjackets are an experience which can be intensified by further restricting mobility with leg restraints to prevent the bottom from easily walking around or immobilizing them completely. Many people utilize sensory deprivation hoods or head cages to add to the bondage experience. Again, exercise good judgment when using extreme methods of restraining someone. Do not leave them alone, check circulation and breathing. Be in control of the situation, that’s what bondage is all about.

Straitjackets have come a long way since their dismal beginning. They have a large fan base, and are not just for the asylum any more. Straitjackets are available in their original medical form and also in a variety of colors and materials to suit many tastes. If extreme restraint is what tantalizes and excites you, then maybe you should try on a stylish sport coat with the sleeves that tie in the back.

This guide was written by Justine Case, Sex Toy Connoseur